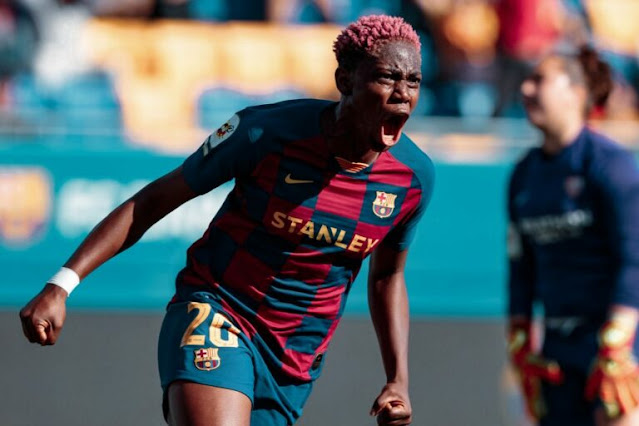 Super Falcons striker, Asisat Oshoala scored a first-half hat-trick to help Barcelona Femini to a 4-0 win over Real Betis in the Spanish Primera Division on Saturday.

The 27-year-old forward opened the scoring in the 18th minute before adding another in the 36th and 44th minutes to complete her first half hat trick for the Champion.

Fridolina Rolfo put the game to bed with her 66th minute strike to give Barcelona their 18th win of the season.

Oshoala, who just returned from a two months injury was in action for 70 minutes making way for Jennifer Hermoso.

The match was Oshoala’s first start after her injury, she had previously made four substitute appearances, scoring once.

The goals takes her tally this season to 15 ahead of fellow strikers, Lieke Martens (13), and world women’s best footballer, Alexia Putellas.

Barca remain runaway leaders in the championship with 18 wins from 18 games and a simply stunning goals record after scoring 104 times and conceding just twice.

Lionel Messi will stop being an official player for FC Barcelona by midnight, when it is already July 1. The Argentine forward’s contract, signed on November 25, 2017 until June 30, 2021, expires today, ending in few hours. Since Joan Laporta return as Barcelona president for the second time, it has been his No.1 goal […]