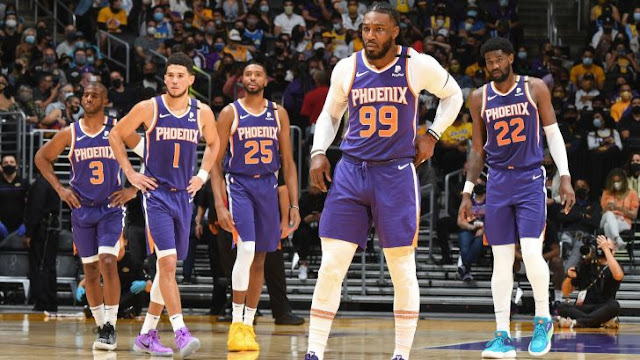 As teams like the Golden State Warriors, Utah Jazz, Brooklyn Nets, Chicago Bulls and Milwaukee Bucks have all fallen to the earth, the Phoenix Suns are rising to the high heavens.

The Suns have the best record in the league at 35-9 and are reminding folks why they represented the Western Conference in the Finals.

IN HIS SEVENTH SEASON IN THE NBA, Suns SG, Devin Booker, has made another substantial leap in his career to lock him in for his third All-Star appearance. Booker’s shot chart continues to be one of the most diverse among scorers.

He attempts the fourth-most shots in the mid-range per game at 6.2 (behind DeMar DeRozan, Kevin Durant, and Brandon Ingram) and shoots 47.6% from there, which ranks 3rd among players who attempt at least 5 per game (behind DeRozan and Durant).

The chemistry between Chris Paul and Deandre Ayton continues to blossom. Vintage Paul is still very efficient at 36-years-old, and Ayton is trending towards making a 2nd or 3rd All-NBA team this year.

The Suns are playing at home for their next game, against a shorthanded Pacers.

After testing positive for coronavirus, American professional basketball player, LeBron James has been placed in the NBA’s health and safety protocols TMZ Sports, revealed that James tested positive for COVID-19 Tuesday afternoon, November 30, and missed Los Angeles Lakers’ game against the Sacramento Kings on Tuesday night. James, who has said he is fully vaccinated against the virus, […]

Drake has just unveiled the latest collaboration between OVO and NBA, and rapper Bobby Shmurda is the face of the campaign to go alongside the drop. The collaborations are scheduled to drop as part of OVO’s upcoming Fall/Winter 2021 collection, with Shmurda showcasing some New York Knicks items. The Brooklyn rapper even wore a Knicks hat like he did in the video for […]