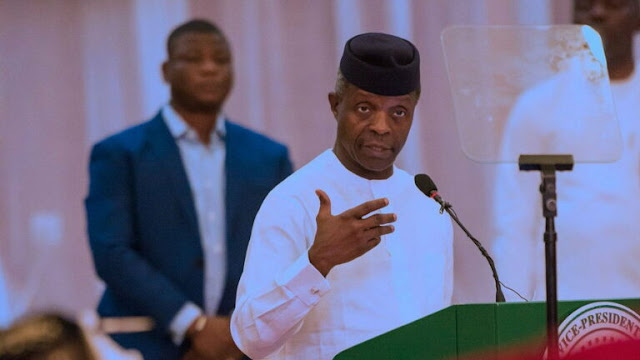 Vice President Yemi Osinbajo has prayed that the Buhari administration will defeat the evil forces that are fueling insecurity and attempting to destroy Nigeria.

On Tuesday, the Senior Advocate of Nigeria (SAN) was the Special Guest at the 8th Sir Ahmadu Bello Foundation Memorial Lecture in Kano.

Osinbajo stated that the Federal Government was determined to win the battle and asked for the people’s support.

“We know that by the grace of God, all of these evil forces will be completely exterminated”, the VP noted.

Calling for a collaborative resistance, Osinbajo said neither the legacies of the past nor the future to be inherited are immune to the “unchecked onslaught”.

He recalled that the President severally reiterated that security agencies must see local institutions as the first line of defence against agents of anarchy.

Osinbajo said given their familiarity with the local environment, traditional leadership are integral to community policing.

“The military and law enforcement agencies are partnering with local age-grade groups, hunters, and various associations.

“The Federal Government has remained resolute in the fight against terrorists and insurgents. Recent efforts have focused on deploying technology for surveillance, intelligence gathering and attack,” he stated.

Osinbajo confirmed the partnership between Ministry of Justice, State counterparts and law enforcement to prosecute those arrested for terrorism and violent crimes.

Anita Joseph Recounts How She Met Her Husband, Lays Curses On Those Awaiting Thier Split

The Senior Special Assistant to the President on Media and Publicity, Garba Shehu, said his principal had his mask on during the exercise but only removed it when he spoke to the microphone. Following the uproar on social media, the Presidency, on Monday, has reacted after Nigerians accused that President Buhari of flouting the COVID-19 […]

Nigeria’s President, Muhammadu Buhari has asked Nigerians to support the Super Eagles despite their ouster from the ongoing Africa Cup of Nations (AFCON) in Cameroon. Recall that the Super Eagles were eliminated in the round of 16 after a 1-0 loss to Tunisia on Sunday. Their exit from the tournament came barely a few hours after Buhari […]