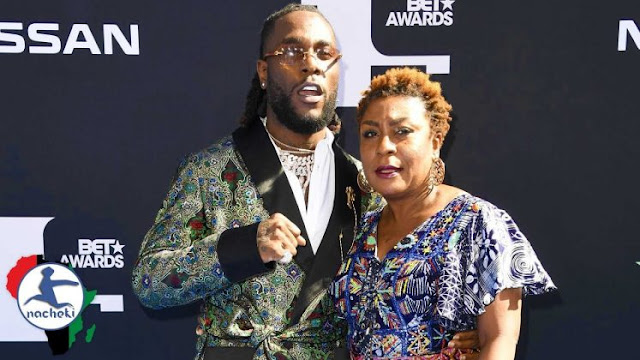 Burna Boy‘s mother, Bose Ogulu, has said that she and her son often dispute over how money should be spent.

This was revealed by the singer’s mother, who also serves as his manager, in a recent CNN interview.

When questioned about the topic on which she and her son, burna boy, have the greatest disagreements, she stated that it is spending.

According to Burna boy’s mother, when it comes to money, Bose and her son, Damini Ogulu, don’t think alike.

“We don’t think we should be spending money on the same thing.” Bose said.

Burna Boy, she said, comes up with different ideas without considering the cost, especially when it comes to video shooting.

“So he comes up with really crazy ideas without really thinking about what it costs or what it doesn’t cost. And so, my first reaction would be no, that’s not going to work. How are we going to make back that money?”

Bose then said that she has realized that no isn’t always the best answer. Rather, they’d figure out a way to make things appear like Burna boy wanted them to without spending a lot of money.

“And then I learned that it’s not ‘no’. It’s just that we should find a way of still making it look like what he wants or close to what he wants without spending as much.”

Read And Enjoy The Music Lyrics To Burna Boy’s “Onyeka”

The prolific Nigerian singer, songwriter, and performer, Damini Ogulu, popularly known as Burna Boy, acquired a 2022 Lamborghini right at the beginning of the year. The Grammy award-winning singer, who was recently embroiled in a social media feud with Ghanaian dancehall singer Shatta Wale, announced the news on his Instagram page on Wednesday, January 5th, […]