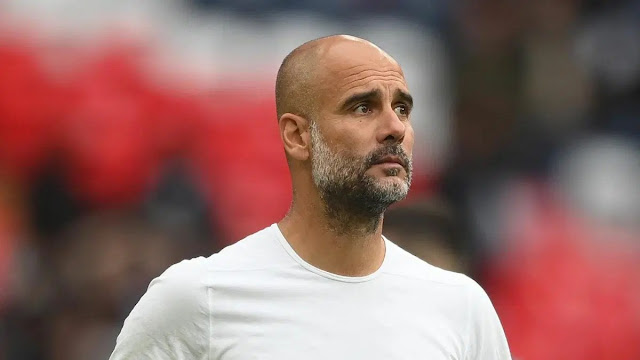 Nigerian duo Kelechi Iheanacho and Ademola Lookman have been hailed by Manchester City manager, Pep Guardiola following their performances in Sunday’s Premier League clash.
Recall that before winning 6-3 at the Etihad, City almost threw away a four-goal lead against Leicester.
On Iheanacho’s return to Brendan Rodgers’ starting XI, he scored a goal and assisted two – one of which was Lookman’s.
Aside from his goal, Lookman’s runs kept the City backline in check. The former Everton star had five successful dribbles and won more than half of his duels.
Guardiola has now singled out the two Super Eagles forwards for their displays against his side.
“They have big quality in transition, and then they changed shape,” Guardiola said after the game.
“Vestergaard is an excellent player, and when Tielemans and Maddison can play, they have lots of quality, with Kelechi and Lookman too.”
Please follow and like us:

Manchester City Boss, Pep Guardiola steered City to the Premier League title and League Cup this season and this Saturday the Spaniard’s side will bid to be crowned kings of Europe for the first time when they face English rivals Chelsea in the Champions League final in Porto. Former Barcelona and Bayern Munich manager Guardiola […]