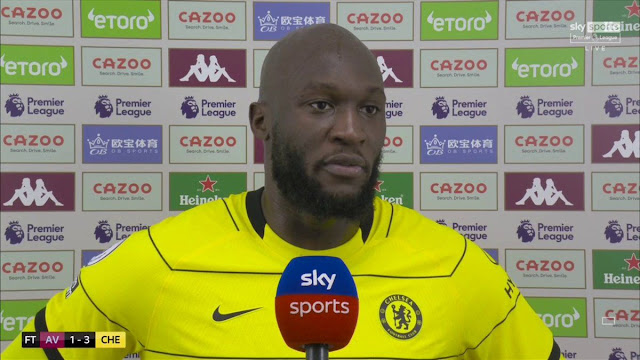 Chelsea striker Romelu Lukaku says their title bid is back on track after victory at Aston Villa.

Lukaku, 28, headed home his first league goal since September to help the Blues claim a precious win at Villa Park, moving them level on points with Liverpool and six behind leaders Manchester City.

He later told 365MediaHub in an interview that the Blues are the real hunters in the Premier League.

“We are the hunters now. The last results for us were not the best and now we have to chase. Every game for us from now until the end of the season is a final, you have to treat them like finals because every game in the Premier League is very difficult.

“Yesterday we won and now we have to push on and keep chasing.

“We had to do a job, we had to win the game. Aston Villa was doing really well in the last couple of games, credit to Steven Gerrard and his staff and their players, they have a really good team and it wasn’t easy for us.

“Now we have to push on and make sure that every game is a final. Win, and that’s it.”

The Liverpool star made it clear that he was happy to be linked to the Spanish giant but would, however, remain at Liverpool. Liverpool ace forward Mohammed Salah has replied to speculations linking him with Spanish Giants Barcelona. The 29-year-old Egyptian football maestro, whose current contract at Liverpool ends in June 2023, made it known that he […]

Thomas Tuchel had high hopes for Kai Havertz, Timo Werner and Hakim Ziyech in their second spells for Chelsea. Speaking to 365MediaHub Team, Tuchel reassured that the three summer signings would be even stronger this season. Each arrived at Stamford Bridge with big reputations, matched with equally strong price tags. Havertz (£71m), Werner (£45m) and Ziyech (£33.3m) […]