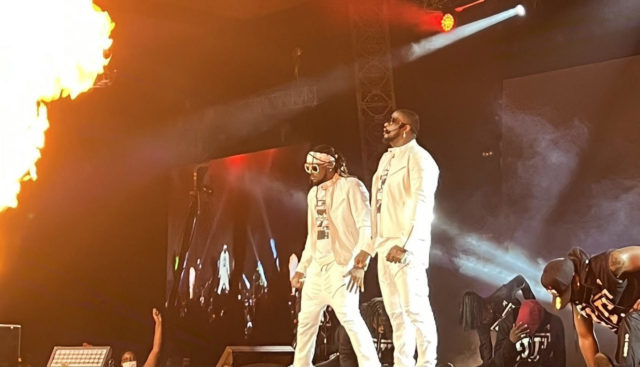 P-Square performed live for the first time since their breakup, and it was a night filled with nostalgic feelings and energetic performances.

Iconic Nigerian singing and performing duo Paul Okoye and Peter Okoye, popularly known as P-Square, returned together on stage for the first time since their split up, and we have all the highlights just for you!

The event, which took place yesterday, December 25th 2021, saw A-list acts like Flavour, May D, Bracket, Reekado Banks, Timaya, J Martins and a host of others.

The duo that broke up in 2016 decided to come back this year, and to thrill their fans, they organized a concert to mesmerize their fans

See highlights from P-Square reactivated below;

P-Square grew to become an household name not just in Nigeria, but in Africa as a whole after they made their mark with their music and trademark dance moves since the early 2000s. Songs like Senorita, Bizzy Body, Get Squared and more in the early days were bangers and they continued this trend till their split in 2017.

The duo have not done badly in their respective solo careers. Peter rebranded himself as Mr P while Paul became Rudeboy dropping hits like Reason With Me. They decided to end their 4-year cold war and reunite recently as their birthday drew closer.