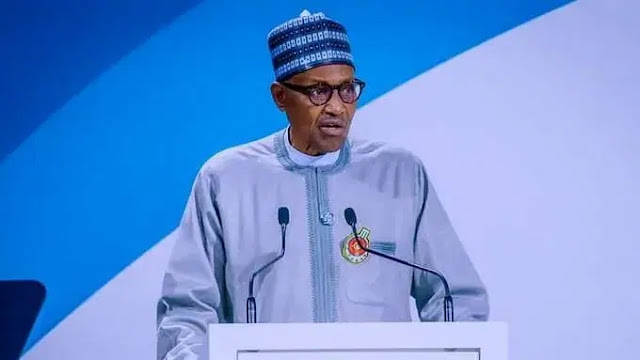 President Muhammadu Buhari has called on troops of operation Hadin Kai to remain steadfast as they go into the final phase of the fight against insurgency.

The call was made on Thursday by President Buhari at the air force base in Maiduguri, Borno state.

Recall that suspected fighters of the Islamic State in West African Province (ISWAP) had launched multiple rocket attacks on Maiduguri ahead of Buhari’s visit to the city to inaugurate projects done by the state government.

Buhari while addressing the troops said the entire nation remains grateful for the gallantry displayed in ensuring gradual return of peace to the north-east, while condoling with families that have lost loved ones, as well as the wounded.

The president said the government will continue to ensure that the widows and children of fallen heroes are well catered for, to help them fully realise their potentials.

“Your career is like no other because it is a conscious commitment and preparedness to give your best for the sake of others,” Buhari said.

“Let me start by commiserating with you all on the unfortunate loss of Brigadier General Dzarma Zirkushu and other personnel of 25 and 28 task force brigades, who died on Nov. 13, 2021.

“I do this mindful of the fact that we have lost others in this theatre of operation as well as other operational areas across the country.

“The people of Borno state and indeed the entire country owe a debt of gratitude to our serving men in uniform for the huge sacrifices in the pursuit of peace.

“I urge you also to stay focused to achieve our strategic end-state which is the defeat of all adversaries and restoration of an economically viable north-east geo-political zone and other parts of the country where Nigerians are free to go about their activities without fear or harassment.”

The president said the response exhibited across the theatre has shown extraordinary resilience and steadfastness in the face of adversity.

Our country, just like all the others in the Sahel region, is faced with several security challenges that are largely characterised by the violent activities of non-state actors.

“This has necessitated several interventions aimed at ensuring the security of persons and property across the numerous hot spots.

“Further improvements in the security situation in Operation Hadin Kai have led to a corresponding rise in the confidence of our people who are now returning in significant numbers to their homes.

“Further to the reorganisations in the military leadership, concerted efforts are being made to improve your equipment holding.”

While noting threats posed by criminals through the employment of improvised explosive devices, Buhari said substantial resources had also been directed at procuring equipment for explosive ordnance disposal.

According to him, similar attention is being given to intelligence, surveillance, target acquisition and reconnaissance assets.

“These measures and the platforms being received would accord you the necessary reach, fire power and protection to project force across the theatre and bring the fight to a logical and successful end,” he said.

The president also said the manpower challenges which have limited the rotation of some units from the theatre would be addressed by concerted efforts to increase recruitment and ensure that the remaining units due for rotation are relieved as soon as practicable.

President Muhammadu Buhari is currently hosting the Prime Minister of the Libyan Government of National Unity, Abdul Hamid Dbeibeh, in the Presidential Villa, Abuja. The News Agency of Nigeria [NAN] reports that Dbeibeh and members of his entourage arrived at the forecourt of the Presidential Villa at about 10.05 a.m, and were received by President […]

President Muhammadu Buhari will depart Abuja Saturday today for a 20 day vacation trip. He is expected to return to Nigeria on May 10th, 2022. He is expected to commission developmental projects especially in the sectors of education, healthcare and roads. At the end of the visit, President Buhari will be proceeding to his country home Daura where he […]