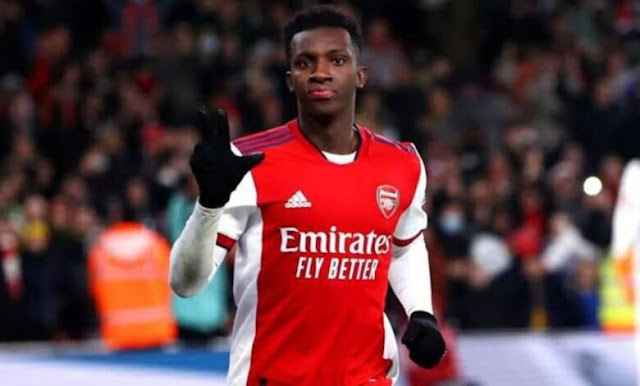 Arsenal’s Eddie Nketiah continued his prolific form in the Carabao Cup as he scored a clinical hat-trick to help his side beat League One side Sunderland 5-1 and help them book their spot in the semi-finals.

The forward turned in from close range to open the scoring after Rob Holding’s header was palmed into his path. Nicolas Pepe soon doubled the lead to make it 2-0. The League One side was not willing to go d9wn without a fight as Nathan Broadhead coolly clipped over the onrushing Bernd Leno from Elliot Embleton’s superbly-weighted pass. The goal became a consolation goal as it was the only goal from the away side.

Nketiah soon doubled his goal as he cleverly turned in a low Nuno Tavares cross straight after the break to re-establish the lead. The 22-year-old completed his hat-trick as he flicked Pepe’s pass between his legs and beyond goalkeeper Lee Burge. The goals kept coming as Arsenal’s 18-year-old debutant Charlie Patino then capped a superb night for the Gunners with a late fifth goal to round up the scoring.

The League One side was competitive but, despite Embleton curling against a post from distance, they struggled against the English Premier League side, they failed to stop Arteta’s men. Arsenal will know their last-four opponents on Wednesday when the draw takes place after Tottenham host West Ham.

Rio Ferdinand has picked former West Ham striker Sebastien Haller for Arsenal to sign this January. The former England defender said the Gunners should acquire the services of Haller instead of Dusan Vlahovic from Fiorentina. The Gunners are finding it difficult landing Vlahovic as they desperately look for reinforcements up top following Pierre-Emerick Aubameyang’s banishment. Arsenal’s […]

Chelsea won the Women’s FA Cup this season, defeating Arsenal 3-0 in the final at Wembley Stadium on Sunday. From the start, Emma Hayes’ team overpowered the female Gunners, with Fran Kirby putting the Blues up after only three minutes. After the break, Sam Kerr extended Chelsea’s advantage and finished the game with a stunning […]

Manchester United have confirmed Michael Carrick will remain in caretaker charge for the Premier League game against Arsenal on Thursday. Our former midfielder has overseen the 2-0 win at Villarreal and 1-1 draw with Chelsea since Ole Gunnar Solskjaer’s departure. Ralf Rangnick was announced as interim manager on Monday but, while the club follows the regulatory […]