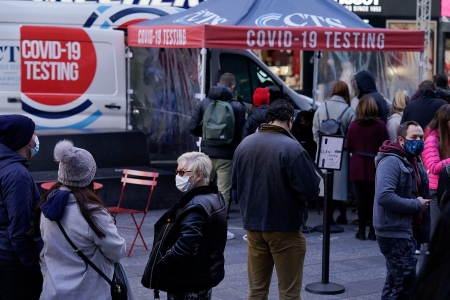 The Netherlands went into lockdown on Sunday and the possibility of more Covid-19 restrictions over the Christmas and New Year period loomed over several European countries as the Omicron coronavirus variant spreads quickly.

He described Omicron as “raging through the world”, and said travelling will increase the risk of infection even among vaccinated people.

US President Biden plans to speak on Tuesday; on the status of the fight against Covid-19 and discuss government help for communities in need of assistance; White House press secretary Jen Psaki tweeted.

Dutch urban centres were largely deserted as the country began a snap lockdown that left people’s Christmas plans in disarray.

Prime Minister Mark Rutte announced the shutdown on Saturday evening, ordering the closure of all but essential stores; as well as restaurants, hairdressers, gyms, museums and other public places from Sunday until at least January 14.

While the Netherlands took the plunge and shut down much of public life; to prevent its healthcare system from being overwhelmed by an expected surge in cases; several other European governments are considering more curbs – at a time when people are normally spending money on shopping, entertainment and travel.

Britain reported a surge in cases of Omicron on Saturday, with 25,000 recorded so far.

Government advisors said this could be the tip of the iceberg and health minister Sajid Javid declined on Sunday; to rule out the chance of further Covid-19 restrictions before Christmas.

Javid said the government was taking the “sobering” advice of its scientists seriously; was watching the data on an “almost hourly basis” and would balance that against the broader impact of restrictions on areas such as businesses and education.

In Italy, the government is considering new measures to avoid a surge in infections during the holiday period, local newspapers reported on Sunday.

After holding a meeting with ministers on December 23; Prime Minister Mario Draghi could mandate that people who have been vaccinated also show a negative test to access crowded places, including discos and stadiums, daily Corriere della Sera reported.

Meanwhile, Israel’s cabinet weighed banning travel with the US, Canada and eight other countries to try to mitigate the local spread of the Omicron variant.

If approved, the new restrictions will go into effect at midnight on Tuesday; the health ministry said.

The highly infectious new strain is in the community transmission phase and has spurred a fifth wave of the pandemic in Israel, Prime Minister Naftali Bennett told the cabinet on Sunday.

There are dozens of confirmed and suspected Omicron cases in Israel; including most of 17 confirmed Covid cases aboard a recent flight from the US.

Two new cases of the Omicron variant were detected in the central Chinese city of Changsha from arrivals into the country; the Xinhua news agency reported on Saturday.

The provincial capital of Hunan is the latest place to discover the highly contagious variant in incoming travellers; after the southern province of Guangdong and the northern metropolis of Tianjin reported cases earlier this month.

Amanda Gorman, an American poet and social activist made history on Wednesday, January 20; as the youngest poet in United States history to read a poem at a presidential inauguration. The 23-year-old poet, Amanda Gorman read a powerful poem at the inauguration of US President Joe Biden and Vice President Kamala Harris. The Los Angeles […]

The World Health Organisation [WHO] has disclosed that the Omicron COVID variant has now been detected in 57 countries. Omicron – labelled a “variant of concern” – was detected by South African authorities and subsequently reported to the WHO. There are reports that the variant had been earlier detected in the Netherlands before the announcement by South […]