NBA’s Greatest Shooter Ever, Stephen Curry, Sets Record For Most 3-Pointers Made In History – 365MediaHub
Skip to content 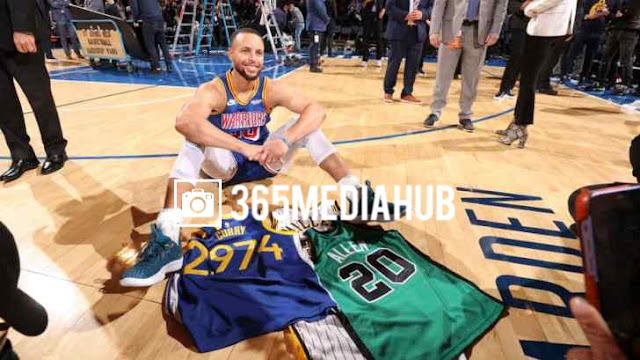 It was an electric atmosphere with both Ray Allen and Reggie Miller in attendance (who had the #1 and #2 spot on the 3-point list before Curry’s ascension).

It was 7 minutes, 33 seconds left in the first quarter when Curry hits the record-breaking shot and the Garden went nuts. The Warriors quickly fouled and called a time out, allowing Curry to receive a long-deserved ovation.

Curry was met with big hugs from Daymond Green and other teammates, then took the record-setting ball and handed it to his father, Dell.

Curry, who’s been trying to play down the significance of the moment over the past weeks, sat down on the bench and teared up as he couldn’t hold it in any longer.

Miller and Allen presented Curry with a Warriors jersey with the number 2,974 on the back after the game. “My respect for Reggie and Ray, guys who set the bar for what it meant to be a sharpshooter,” Curry said.

At age 33, Curry is putting together one of the best seasons in his career and has the Warriors at the top of the Western Conference without star guard Klay Thompson.

Stephen Curry has refined the game of basketball with his shooting and set a 3-point record some say will never be broken.

Curry has at least 3-5 more years to add to that grand total of three’s. Can Curry finish his career north of 4,000 3-pointers made?

Throwback Music: Justin Bieber – “Somebody To Love” [With Music Lyrics]

On Today’s segment of Thrown Back musics which on which we select your favorite hits that trended and gain hits back then, we are back here with an old music from Justin Bieber and this one is titled “Somebody To Love”, a song that trended back then and top your music playlist. Hit the download […]

365Sports: Chelsea Extends Their Lead At The Top Of Premier League Table With 3 – 0 Win

Chelsea extended their lead at the top of the English Premier League to three points as Reece James scored twice in a 3-0 win at Newcastle on Saturday, October 30 while Liverpool and Manchester City stumbled at home. Liverpool blew at 2-0 lead at Anfield as Brighton battled back to earn a deserved 2-2 draw […]