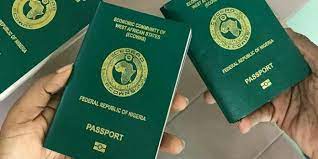 The National Union of Nigerians Associations in Italy (NUNAI), have appealed to Federal Government to make available more passports booklets to Nigeria Embassy in Italy.

The group make the appeal in an open letter to the Minister of Interior, Alhaji Rauf Aregbesola and that of Foreign Affairs, Mr Geoffrey Onyeama, which was made available to newsmen in Benin on Wednesday.

The letter was signed by President of the union, Mr Rowland Ndukuba, Welfare Officer, Mike Oputteh and the spokesman, Bruce Idahosa.

The union stated that the appeal became imperative as a result of the fact that many Nigerians living in that country have been denied access to jobs.

It stated that the currently monthly provision of leas than 2000 passport booklets was grossly inadequate.

While describing the situation as unfortunate, it noted that many applicants that were scanned since May are yet to get their printed passports till date.

“Over the years, the Nigerians living in Italy have been totally grateful towards the immeasurable assistance that the offices of the controller General of the Nigerian Immigration, Minister of Interior, and that of Foreign Affairs have rendered in making their living conditions worthy of commendations.

“However, for humanity sake, NUNAI, with all humility appeal to them to save thousands of Nigerians living in Italy that have applied for passports to enable them process or retain their businesses.

“They also need this for their working contract, Permits of Stay, Residence and other necessary documents in Italy.

“We appeal to the federal government to make available the regular passport booklets to the Nigerian High Commission in Rome, Italy to save Nigerians in Italy.

“This appeal is imperative as a result of the fact that many Nigerians are denied access to jobs due to the fact that they can not provide valid passports and are thereby subjected to countless hardships,” it stated.

The union noted that it have been duly informed that the Nigerian High Commission in Rome is doing all in its power to clear the backlog of seven months.

“It’s unfortunate that Nigerians scanned since May 2021 till date are yet to to be issued their printed passport.

“The Nigerian High Commission in Rome capture over 3000 Nigerians in a month for passport issuance.

Some of the senior players at Barcelona were in the line of fire earlier this month due to them not agreeing to take pay cuts amid the club’s struggles to register their new signings. One of the four club captains, Gerard Pique, made the first move by agreeing to a substantial reduction in his salary, […]

Fix Our Refineries So Petrol Will Be Cheaper, NLC Tells Federal Government

The federal government has announced the possible resumption of flights between Nigeria and the United Arab Emirates [UAE]. Direct flights between both countries were suspended in March over issues relating to COVID-19 protocol. Speaking at a media briefing on Monday, Mukhtar Muhammad, national incident manager of the presidential steering committee on COVID-19, said that both […]