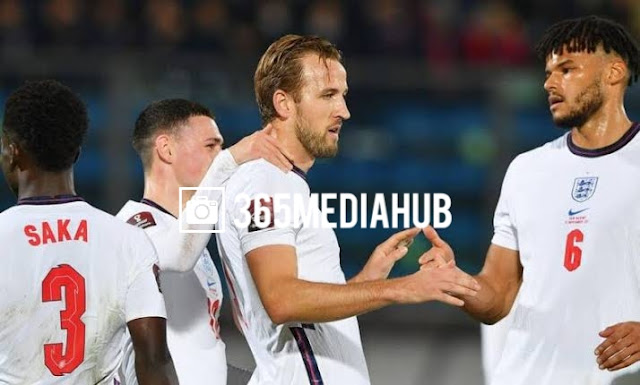 The England national team have booked their spot in Qatar 2022 World cup after a ten goal win over San Marino.

The Three Lions have put the game to bed at halftime after the 6-0 first half thrashing of the San Marino side.

It was a game of top placed team vs last placed team with England only needing a point to join the Qatar train.

San Marino, who are yet to secure a point heading to this game and have had only one victory in all of their history, had everything to play for against a high flying England side.

In only six minutes of play, the visitors found the back of the net after a Phil Foden Corner kick was met by the head of Maguire to score his second opening goal of the qualifier after he put England ahead in their previous game against Albania.

Bukayo Saka’s deflected shot made it two-nil, and just when you thought they were going to take their foot off the gas, Harry Kane ran riot with four goals in the space of 15 minutes in the first half.

The Tottenham striker dispatched two penalties, a solo goal and an assist by Emile Smith Rowe.

Gareth Southgate changed into the second half with Chelsea loaned player Conor Gallagher making his first senior debut after being recalled with some regulars opting out with injury.

The three lions moved on to score four goals in the second half, with Smith Rowe, Tyron Mings, Tammy Abraham and Bukayo Saka finding the back of the net.

England did themselves a lot of good with the win despite Poland falling by 2-1 against Bulgaria.

Poland will therefore need to win the Playoff match next year to join the Qatar 2022 train.

England To Open Border Without Quarantine For EU, US Travellers

England is expected to open its borders to allow US and EU Travellers who are fully vaccinated against Coronavirus to enter without the need to quarantine, according to reports. he plans, which would be a boost to the aviation and tourism sectors; are expected to be discussed by ministers on Wednesday, The Guardian and The […]

Some of the senior players at Barcelona were in the line of fire earlier this month due to them not agreeing to take pay cuts amid the club’s struggles to register their new signings. One of the four club captains, Gerard Pique, made the first move by agreeing to a substantial reduction in his salary, […]