The 2022 FIFA World Cup qualifier between Brazil and Argentina in Sao Paulo on Sunday was suspended due to a breach of Brazilian coronavirus restriction rules. 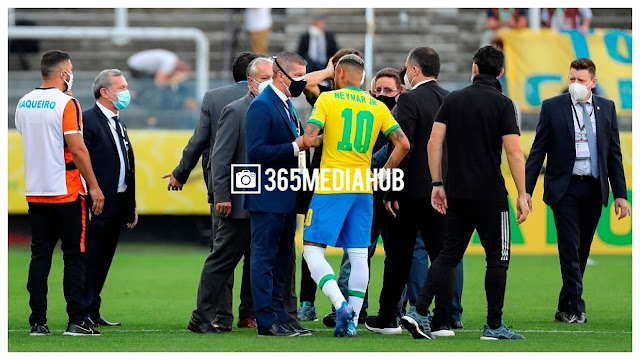 In extraordinary scenes, health officials entered the pitch early in the game to object the participation of three Argentinian players who they alleged had broken the coronavirus travel rules.

They did so by providing false information in the entry form, according to Antonio Barra Torres; the president of the Brazilian health regulatory agency, Anvisa.

“By decision of the referee, the match between Brazil and Argentina at the World Cup Qualifiers organized by FIFA is suspended,” South American ruling body CONMEBOL said; adding that the world governing body FIFA would decide what should be the next step.

The president of the Argentinian football federation (AFA), Claudio Tapia, said what happened “is unfortunate for football.

“Four people entered [the pitch] to interrupt the game with a notification…CONMEBOL asked the players to go to the locker room,” he said. 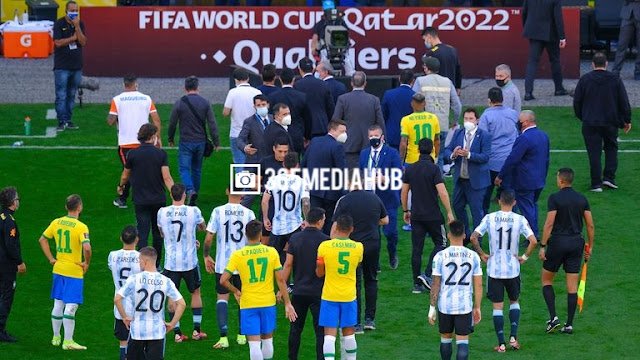 Anvisa had previously asked the federal police to send away three Argentine players. They include Emiliano Martinez, Emiliano Buendia, Cristian Romero and Giovani Lo Celso; due to the COVID-19 regulations breach. The four are from the English Premier League (EPL).

Travellers are not allowed to enter Brazil if they have been in the country in the 14 days prior to the trip.

However, just before the match, the AFA and the Brazilian government reached an agreement. As a result, the players were allowed to take part in the game.

Torres denied the agreement, insisting: “These players must be deported.”

According to news portal G1, the federal police tried to reach the players in the hotel; then in the locker room, but were not allowed by AFA.

“We got to this point because they did not comply with the Anvisa guidelines,” Torres said.

Anvisa said in a statement released before the game it had asked the federal police to “take action immediately.”

“Anvisa considers the situation a serious health risk, and therefore advised the local health authorities to order the immediate quarantine of the players, who are prevented from participating in any activity and should be prevented from remaining in Brazilian territory,” the agency said.

Before travelling to Sao Paulo, the players declared they were in Venezuela. But Anvisa said it was informed by non-official sources that this statement was not true.

“After meeting with health authorities, it was confirmed, following a passport check of the four players involved; that the athletes disrespected travelling rules,” Anvisa said.

Brazil’s 2002 World Cup winning team have reunited two decades on, but where are they now? Iconic striker Ronaldo owns two clubs, Cafu is an ambassador for this year’s tournament in Qatar while one star recently played a Sunday League match in Shropshire. The stars from Brazil’s 2002 World Cup winning team reunited on Thursday, June 30, 2022 to celebrate […]

Brazil has emerged as the winner of the Men’s football competition at the Tokyo 2020 Olympic Games. The match ended 1-1 after normal time, which saw the game go into extra time. Malcom Filipe Silva de Oliveira popularly known simply as “Malcom” scored the winning goal in the second half of extra time for Brazil, which ensured the victory over […]