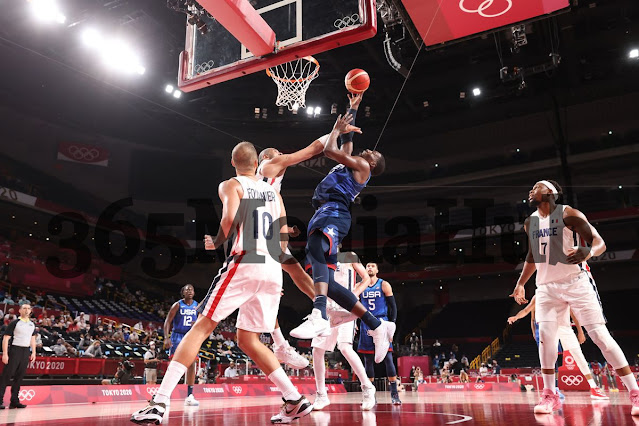 The basketball event of the Tokyo Olympics has kicked off with a huge upset after the United States fell to unfancied France and Nigeria lost to Australia today, Sunday July 25 2021.

Nigeria fell to Australia 84-67 in an earlier game played in Group B.

D’Tigers, as the Nigeria national men’s basketball team are known, struggled to cope with the more experienced Aussies. The trio of Gabe Vincent, Precious Achiuwa, Jordan Nwora and KZ Okpala were key for Nigeria.

Okpala scored four points on 2-5 shooting with three rebounds, one assist and four fouls. Achiuwa had 10 points on 4-9 shooting along with six rebounds (two offensive).

He had five turnovers and three fouls; but also contributed two assists, three steals and one block.

Vincent scored seven points, only going 1-6 from deep and 4-8 from the free throw line but grabbed five rebounds and notched an assist and a steal.

However, Jordan Nworah was highly inspirational; leading Nigeria’s rearguard action and also coming up with some crucial three pointers.

He was also responsible for trying to drag Nigeria back into the game when Australia began opening up a huge lead in the third quarter.

In the other encounter, the US were left stunned after France launched a resurgence late in the game to win their tie.

France beat the US 83-76; wearing down the US with a formidable 7-foot trio of Rudy Gobert, Vincent Poirier and Moustapha Fall.

The defeat marked the USA’s first loss in Olympic play since 2004, snapping a 25-game win streak.

USA seemingly had total control of the game thanks to a huge 16-4 run to close out the first half and Adebayo’s talents were on full display to the world.

However, France quickly cut the deficit to four points within minutes. Thereafter, they eventually tied the game at 52-52 with a 12-3 run.

In the fourth quarter, France went on the offensive, overturning an eight-point lead by the US to win the tie.

President Muhammadu Buhari has issued another warning to All Progressives Congress [APC] leaders. The party’s national convention will be held on Saturday at Eagle Square in Abuja. In a statement on Friday, the President cautioned the APC not to do anything “that will jeopardize the chances of the party in the 2023 General Elections”. Buhari […]

Nigeria Vs Ghana: What Osimhen Said About The Black Stars Of Ghana [Must Read]

Super Eagles striker, Victor Osimhen, has spoken highly of the Black Stars ahead of Nigeria’s 2022 FIFA World Cup qualifying matches against Ghana. While calling the Ghana side a quality team, Osimhen strongly believes Nigeria has the squad depth to get the job done against the Black Stars. Addressing a press conference on Thursday, Osimhen […]