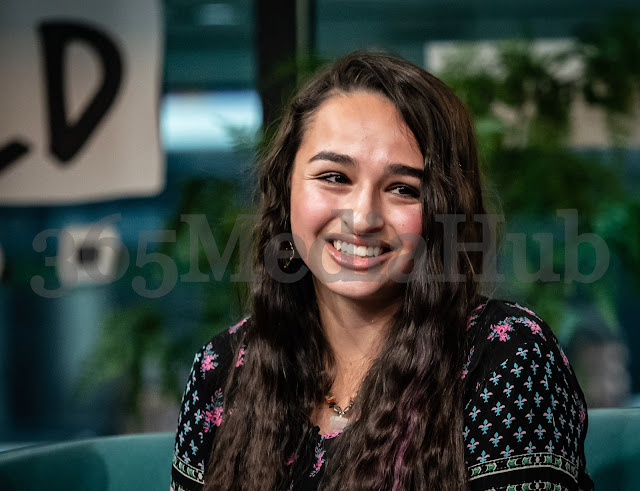 Transgender activist and reality star Jazz Jennings is opening up about her struggle with binge-eating disorder. In a post on Friday, the “I Am Jazz” star shared a side-by-side photo of herself in a sports bra and black shorts, compared to another undated photo that appears to be from a few years ago.

The 20-year-old wrote that she has “gained a substantial amount of weight” as a result of her disorder.

“I’m not only addicted to food, but I eat it in large quantities. My binging, along with an increased appetite I experience from some of the meds I’m on, has caused me to gain almost 100 pounds in a little less than 2 years,” she captioned the picture.

Jennings added that she is sharing the photo to address her weight gain and “hold myself accountable.”

“I’m ready to change my ways; I’ve been saying I’m ready to turn over a new leaf, but I’m running out of trees now,” she said. “I’m ready to take the initiative and create positive changes when it comes to my health and body. I have a fabulous team supporting me, both professionals and family/friends, but at the end of the day, I have to be the one committed toward bettering myself. I know I have the power in me to lose the weight, and I intend on sharing my progress with all of you.”

It’s clear she will have the support of her family for her wellness journey.

“You are so resilient and can do anything you put your mind too. I believe in you and will be by your side every step of the way,” her brother Sander wrote in the comments with a heart emoji.

Jennings catapulted to the national spotlight in 2007 following an interview with Barbara Walters on “20/20.” After several other high-profile segments and documentaries, she landed a reality series about her life, “I Am Jazz,” which aired on TLC.

Jennings has previously shared other body-positive photos on social media. In early 2020, the reality star posted a bathing suit photo, writing that she was proud of her gender confirmation scars.

“I’m proud of my scars and love my body just the way it is,” she wrote. “I call them my battle wounds because they signify the strength and perseverance it took to finally complete my transition.”

With her announcement on Friday of her plans to get healthy, Jennings appears to be taking a page out of actor Rebel Wilson’s book. The “Pitch Perfect” star embarked on a “year of health” in honor of her 40th birthday and documented the journey for her fans on social media. In November 2020, she announced that she had hit her goal weight with a month to spare but added “it’s not about a number.”

In an Instagram live at the time, Wilson implored her fans watching to not feel bad about emotional eating or overeating.

“It’s just about how you manage it and what you can do to try to replace your unhealthy habits with healthy ones,” she said, adding that she had worn her weight “as a bit of barrier, you know, maybe so that people wouldn’t get close to me.”

She said that her wellness journey taught her she wasn’t treating herself with love and respect when she was “doing those unhealthy behaviors.”

“And anybody else out there I would try to treat with love and respect but myself I probably wasn’t I’d leave myself to last,” she said. “I just wasn’t valuing myself and telling myself negative things and going ‘Yeah, well stuff it. Yeah, just eat that whole thing of ice cream or that whole packet of brownies because who cares, whatever you deserve that.”

“That was hard,” she said. “And so what I’m trying to do is change those patterns so you’re more loving and you’re treating yourself with more respect.”

On COVID-19: UAE Lifts Ban On Travels Between Dubai & Nigeria