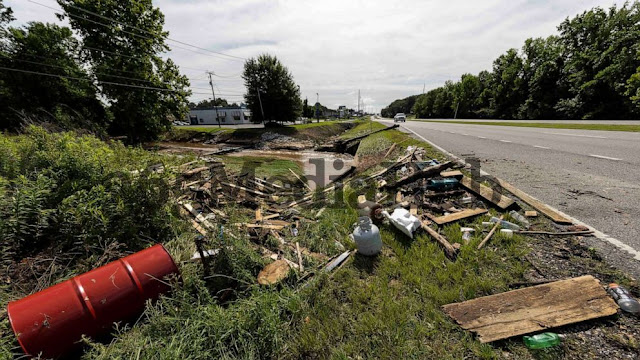 Nine children were among 10 people killed in a horrific horrific vehicle crash that occurred on Interstate 65 in Butler County, Alabama, on Saturday and involved a bus from a home for abused, neglected and abandoned girls, authorities said.

The crash occurred about 2:30 p.m. and involved 15 cars after one vehicle was believed to have hydroplaned on wet pavement, said Wayne Garlock, Butler County, Alabama, coroner. The crash came as Tropical Storm Claudette swept across Alabama and much of the Southeast, dumping heavy amounts of rain.

A father and daughter, Cody Fox, 29, and Ariana Fox, 9 months, died in the accident when their SUV overturned, according to Garlock. Cody Fox was pronounced dead at the scene and Ariana died at a hospital.

The eight deaths were those of children aged 4 to 17, who were traveling in a Tallapoosa County Girls Ranch bus. The children and the driver were the only ones on the bus.

The bus driver was rescued by a bystander who got out of his car and pulled the driver to safety. The bystander tried to then help the kids inside but the bus was already engulfed by smoke and flames and he could not get to them, officials said.

None of the other people who survived the chain-reaction crash appear to have life-threatening injuries. One woman is in a Montgomery hospital with broken bones, Garlock said.

“Our hearts are so heavy today. Our Ranch family has suffered a great loss. As many of you may have heard, one of our Ranch vehicles was involved in a multiple car accident yesterday afternoon. It is such a horrible tragedy and loss,” said Michael Smith, chief executive officer of Alabama Sheriffs Youth Ranches.

The National Transportation Safety Board is sending 10 investigators to conduct a safety investigation of the crash in coordination with the Alabama Highway Patrol, the agency said on Twitter.

The NTSB said its investigators were scheduled to arrive at the scene of the crash Sunday night.

Target Deal Days Has Arrived, Here’s What You Need To Know

The Government in Sudan says it has thwarted an attempted military coup. “There has been a failed coup attempt, the people should confront it,” state media reported on Tuesday. Reports from the capital Khartoum and nearby Omdurman say there has been intense military activity, and the main bridge across the River Nile has been closed. […]

Professor Yemi Osinbajo has disclosed that ethnicity, religion or class can not separate Nigeria. This was disclosed on Saturday by Osinbajo during a courtesy visit to the palace of Umar Farouk, Emir of Katagum, shortly after attending the wedding of Fatima Adamu, daughter of Adamu Adamu, education minister, in Azare, Bauchi state. Laolu Akande, Osinbajo’s spokesperson, […]