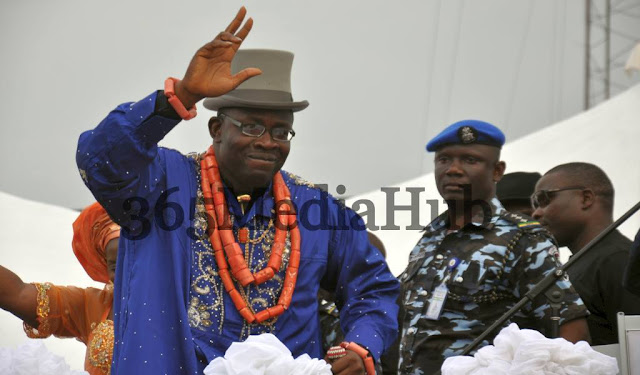 The Former Governor of Bayelsa State Senator Seriake Dickson on Monday May 24 held a conversation ; ‘Tweet Meet’ with Young Journalists and prominent Influencers from different parts of the country.

Senator Seriake Dickson while speaking on his stand on topical issues bedeviling the country ranging from the state of the Economy, to the problem of insecurity, Constitution amendments vis-a-vis Restructuring which is been widely clamored for by Nigerians assessing the economic situation of the country, and recalling that last week, Governors proposed that fuel PMS be sold at N380 removing subsidy totally Nigerians have been plunged further down into poverty line ignoring the ripple effect such actions will have on the people and Economy, and also incessant borrowings by the Buhari led administration said;

“In dealing with the Economy of a nation, objectivity remains a key factor and not partisanship. There’s nothing wrong with borrowing if you’re borrowing to grow the economy. The people ought to see tangible evidence of what your borrowing about for.”

“For me, considering the many sufferings plaguing Nigerians, I will advice that for whatever reason, compounding the woes of Nigerians in form of subsidy removal will be ill-timed. We can seek to cut the cost of running this very expensive system of govt”

Senator Dickson Speaking on Insecurity, Division along tribal and religious lines as evidenced by the vast killings from Boko Haram, to Fulani herdsmen and Bandits while also answering questions arising from what can best described as anger and outcry from Nigerians on Media on failure of the president Muhammadu Buhari, his vice Professor Osinbajo and the entire presidency’s failure to honor the officers including the late COAS who passed away in the recent plane crash said.

“The Senate of which I’m part of, has little to do in a Presidential system of government that invested so much power on the President. That is one of the shortcomings of our system, and so the President needs to rise to the responsibilities of his office”

“The APC played a destructive pattern of opposition, politicizing insecurity. The insecurity is has come back to haunt them.

Still speaking on security, he said, “The issue of herdsmen and the menace that open grazing and carrying of arms causes in the society.”

According to Senator Dickson,

“You don’t play politics with Issues of National Security and Economy. We must say it as it is.”

“A Nation where the Police is underfunded, undertrained and is commanded from the Centre in Abuja cannot be swift to protecting life and property in remote communities this is why the Army is overstretched.

“The police needs to be well funded and given proper welfare. No country can achieve good security, or enjoy law and order with a frontline agency like the @PoliceNG living in slums, and receiving stipends for salaries.

Addressing Restructuring as one of the major issues on the front burner of discussions and debates across the country he said,

“The concept of restructuring” has been misconstrued to a great extent.

“In talking about Restructuring, the role of the judiciary must come into lime light and deliberations must end in ‘constitutional amendment not secession’.

“Anybody that is against restructuring is not a friend of Nigeria, Nigeria’s unity is highly desirable and beneficial.”

“Nigerians never agreed on this bogus Presidential system. Presidential System of government is an Executive Monarch.”

“Those calling for restructuring just like myself are believers of one big Nigeria, but a Nigeria that is fair to all, that no group would feel the country is theirs alone. Restructuring is a challenge of nation building and establishing justice.”

“Devolution of Power is not Restructuring, but a part of it. It means Constitutional Reform-a call for a return to the 1963 Constitution.

“Those who said restructuring means different things are speaking out of crass ignorance.”

“The issue of electoral reform is very pertinent in our discussions as regards the development of the country, because the place of getting our governance right occupies an eminent position in our nationhood”

“It’s quite unfortunate that President refused to sign the electoral reform as painstakingly put together by the Legislature. He should take a cue from his predecessor who introduced the wonderful card reader system”

“Fairness and Justice is the only way to unity in this country.

“I am of the view that the President has not risen to his responsibilities, he is too silent on crave issues threatening the fabrics of our society”

The session came to an end having exhausted questions from Journalists, Influencers present and also Nigerians who joined in the “Tweet Meet” from across the country.

Sen Dickson thanked all present and further encouraged the young people not to get tired of doing and demanding for the right things and also speaking truth to power.

“Let’s not give up on Nigeria, let us channel our energies from destruction to construction of the country. We can build a new Nigeria. Let us vote in people who believe in a Nigeria for all whether big or small.

“A Nigeria that goes beyond the colonial era,” he added.