The President Muhammadu Buhari has written to the Nigerian Senate to confirm the appointment of the newly appointed Service Chiefs. 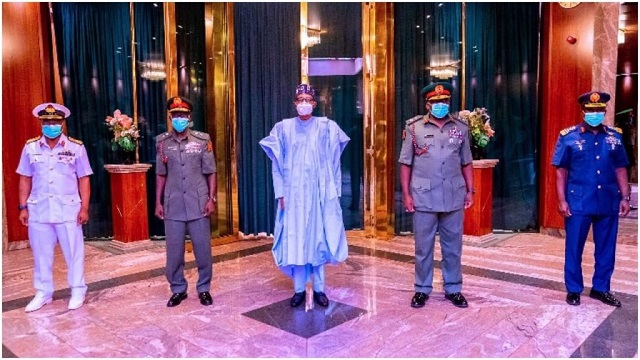 This was made known in a statement on Friday by Babajide Omoworare, special adviser to the president on National Assembly Matters, Gistlover reports.

He revealed that Buhari asked the senate to confirm the appointment of the security nominees in a letter dated January 27.

Omoworare said, “President Muhammadu Buhari has communicated the appointment of the service chiefs to the National Assembly and has sought for the confirmation of the said appointment by the Senate through his letter to the Senate President dated January 27, 2021. This was done in furtherance of Section 18 (1) of the Armed Forces Act Cap. A.20 Laws of the Federation of Nigeria.

“Contrary to fears expressed in some quarters that President Muhammadu Buhari has bypassed the National Assembly in the process of appointment of the service chiefs and that he has no intention of seeking consideration and confirmation of their appointment, Mr President upon nomination for appointment sought confirmation of the Senate for the appointment of Major General Lucky Irabor, Major General Ibrahim Attahiru, Rear Admiral Awwal Gambo and Air Vice Marshal Isiaka Amao as Chief of Defence Staff, Chief of Army Staff, Chief of Naval Staff and Chief of Air Staff respectively, vide his aforementioned letter.”

He added, “It will be recalled that the National Assembly will only resume plenary sessions on February 9, 2021, when hopefully Mr President’s communication for consideration and confirmation of thenomination for appointment of the Service Chiefs would be undertaken.

“Before this administration, confirmation of service chiefs were not sought and obtained from the National Assembly in consonance with the provisions of Section 18 (1) of the Armed Forces Act Cap. A.20 LFN. We are aware that in Keyamo Vs. President & Ors, the Federal High Court set aside the Armed Forces Modification Order 2008 (purportedly made under Section 315 [2) of the Constitution) on July 1, 2013, and ruled that the confirmation of the National Assembly must be sought for the appointment of the Service Chiefs. We are in compliance with the spirit and letters of both the statute and case law.”

South Africa mourns the loss of former president FW de Klerk. De Klerk, South Africa’s last white president, died on Thursday at the age of 85. His foundation announced that he died after a battle with cancer, with De Klerk having announced his diagnosis when he clocked 85 years of age earlier this year. The statement […]

Nigerian music industry top hit maker, Davido who is also representing internationally has went to his social media pages to make a new declaration calling himself the new president of Nigeria, we are still yet to know how real he means this or maybe he is ready for the new term. He dropped a video […]