Aliko Dangote of Nigeria is Africa’s richest person for the tenth time in a row, according to the 2021 Forbes’ Africa Billionaires List released on Friday January 22. 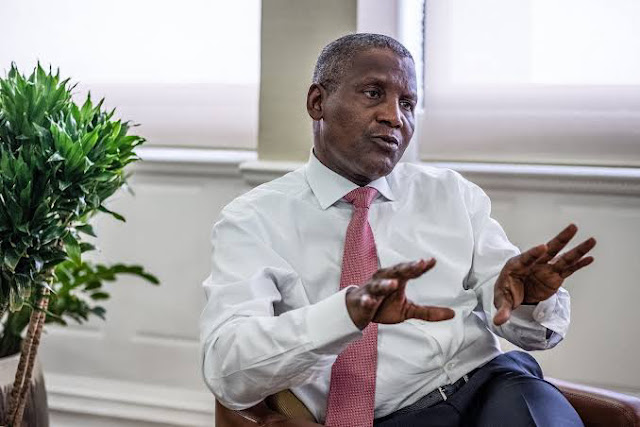 Forbes stated that the president/CEO of Dangote Group is now worth $12.1 billion, up by $2 billion from last year’s list following a 30% rise in the share price of Dangote Cement.

“For the tenth year in a row, Aliko Dangote of Nigeria is the continent’s richest person, worth $12.1bn, up by $2bn from last year’s list, thanks to a roughly 30 per cent rise in the share price of Dangote Cement, by far his most valuable asset,” Forbes stated in its report.

The list captured seven different countries with 18 billionaires; South Africa and Egypt each have five billionaires, followed by Nigeria with three and Morocco with two. Altogether they are worth $73.8 billion, slightly more than the $73.4 billion aggregates worth of the 20 billionaires on last year’s list of Africa’s richest people.

Mike Adenuga of Globacom, and Abdulsamad Rabiu of BUA Group, both Nigerians, made it to the list as the 5th and 6th richest persons in Africa respectively.

“Remarkably, shares of his BUA Cement PLC, which listed on the Nigeria Stock Exchange in January 2020, have doubled in value in the past year. That pushed Rabiu’s fortune up by an extraordinary 77%,” to $5.5 billion, the report stated.

The second richest is Nassef Sawiris of Egypt, whose largest asset is a nearly 6% stake in sportswear maker Adidas. Nicky Oppenheimer of South Africa, who inherited a stake in diamond firm DeBeers and ran the company until 2012, when he sold his family’s 40% stake in DeBeers to mining giant AngloAmerican for $5.1 billion, is at number three.

The report also said that while some got richer by the billions, two women from the 2020 list of Africa’s richest dropped below the $1bn marks.

“Forbes calculates that the fortune of Folorunsho Alakija of Nigeria, who owns an oil exploration company, dropped below $1 billion due to lower oil prices. And Isabel dos Santos, who since 2013 has been the richest woman in Africa, was knocked from her perch by a series of court decisions freezing her assets in both Angola and Portugal, the report added.

Yemi Osibanjo Will Take Over Before The End Of 2021 – Prophet

Japanese pop star Sena Kana is shaking up the music industry with her angelic voice, uplifting lyrics, lineup of star-studded collaborations, and genre-defying hits. Her latest single, “Show Me,” with Ty Dolla $ign and mega-producer Poo Bear, is no exception. The song is the perfect blend of pop, R&B, hip-hop and electric with lyrics promoting sincerity, intentions, […]

Tonto Dikeh has chid men flooding her DM with love proposals saying all she wants to talk about is money and not love calling them Instagram slay boys. Tonto Dikeh was busy asking guys in her DM talking about love to let her be while her boyfriend Prince Kpokpogri is been accused of sleeping with […]