Amanda Gorman, an American poet and social activist made history on Wednesday, January 20; as the youngest poet in United States history to read a poem at a presidential inauguration. 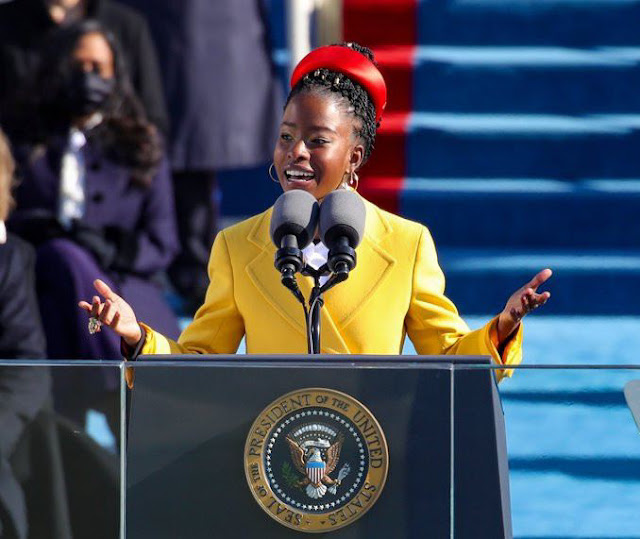 The 23-year-old poet, Amanda Gorman read a powerful poem at the inauguration of US President Joe Biden and Vice President Kamala Harris.

The Los Angeles native reportedly finished writing the poem, titled “The Hill We Climb,” on the night of January 6, hours after rioters took part in a siege on Capitol Hill.

Gorman opened her poem Wednesday by saying, “We braved the belly of the beast.”

“We’ve learned that quiet isn’t always peace and the norms and notions of what just is, isn’t always justice. And yet the dawn is hours before we knew it, somehow we do it, somehow we’ve weathered and witnessed a nation that isn’t broken but simply unfinished,” she said.

“We, the successors of a country and a time, where a skinny black girl descended from slaves and raised by a single mother can dream of becoming president, only to find herself reciting for one.”

“And so we lift our gazes not to what stands between us, but what stands before us. We close the divide because we know to put our future first. We must first put our differences aside,” Gorman said.

The basketball event of the Tokyo Olympics has kicked off with a huge upset after the United States fell to unfancied France and Nigeria lost to Australia today, Sunday July 25 2021. Nigeria fell to Australia 84-67 in an earlier game played in Group B. D’Tigers, as the Nigeria national men’s basketball team are known, struggled to […]

China has condemned the US Treasury’s decision to blacklist 34 Chinese companies and institutes; calling allegations that they were developing “brain-control” weaponry “totally groundless.” 34 entities, including the Chinese Academy of Military Medical Sciences (AMMS); were added to the blacklist on Wednesday – prohibiting them from purchasing any US technology. Before Wednesday’s additions, the blacklist already […]